During significant virtual talks on July 23, between representatives of the Vietnamese Government and South Korean and German counterparts, the foreign countries spoke highly of Vietnam's success in responding the Covid-19 pandemic.
Amy Nguyen
July 25, 2020 | 07:25

The online talks discussed bilateral cooperation in the fight against COVID-19 and economic recovery, as well as other mutual concerns.

During his phone talk with Foreign Minister of the Republic of Korea Kang Kyung-wha, Vietnam Deputy Prime Minister and Foreign Minister Pham Binh Minh informed his counterpart that Vietnam is considering the resumption of commercial flights with several countries, including South Korea, Nhandan reported.

The representative of South Korea congratulated Vietnam for its success in fighting the COVID-19 pandemic, also promised to assist Korean businesses in expanding and investing in Vietnam. She expressed South Korea’s gratitude to Vietnam for having created favorable conditions for Korean businesspeople and experts to enter the country and pledged to cooperate with ASEAN and Vietnam in the near future.

The two nations shared each one’s experience in fighting the global pandemic, at the same time agreed to enhance collaboration in different aspects, especially in economic development and responding to the new situation.

Minh also revealed that Vietnam is considering resume commercial flights with several countries, including South Korea as the country has initially contained the novel coronavirus and reopened the economy.

Accordingly, the related ministries have built plans for the resumption of international commercial flights as part of the country’s efforts to facilitate the entry of foreign experts and businesspeople.

Resuming international flights also sends a message that Vietnam is a safe destination for visitors and investors amid uncertainties of the global health crisis.

On the same day, Vietnam Deputy Foreign Minister To Anh Dung held an online talk with Minister of State at the Federal Foreign Office of Germany Niels Annen.

During the online meeting, the two sides expressed their joy at the strong development of the Vietnam-Germany strategic partnership regarding many fields, successfully marked the 45th anniversary of the establishment of diplomatic relations (1975-2020).

Deputy Foreign Minister To Anh Dung affirmed that Germany is always the most important partner of Vietnam in the EU. The two countries' recent adoption of the Strategic Action Plan and the establishment of the Joint Committee on Economic Cooperation is an important step, contributing to promoting bilateral cooperation, particularly economic and trade cooperation, especially when the EU-Vietnam Free Trade Agreement (EVFTA) will take effect from August 1, 2020.

The two sides look forward to ratifying the EU-Vietnam Investment Protection Agreement (EVIPA), creating a legal framework to encourage businesses from both sides to boost investment in potential areas.

Mr. Annen said that Germany attaches great importance to Vietnam's role in Southeast Asia and expressed his agreement with measures to deepen the Vietnam-Germany strategic partnership in the areas of mutual benefit, namely trade-investment, science-technology, healthcare and education.

Germany congratulated Viet Nam's success in responding to the Covid-19 epidemic. Deputy Minister To Anh Dung highly appreciated the contribution of the German Government to the global response to the COVID-19 epidemic and its international cooperation initiatives in this concern, affirming that Vietnam is willing to work closely with Germany in maintaining trade, especially essential goods, medical supplies, raw materials for production and research of preventive vaccines.

Regarding multilateral cooperation, Deputy Minister To Anh Dung highly appreciated the cooperation and mutual support between Germany and Vietnam at international organisations, especially when the two countries are both taking on a dual role: a non-permanent member of the United Nations Security Council and a key member in the region, as Vietnam is the ASEAN Chair in 2020 and Germany is the rotating EU President in the last 6 months of 2020.

Vietnam supports external partners, including Germany, to strengthen cooperation with ASEAN for the shared benefits, contributing to promoting trade liberalization, multilateralism and compliance with international laws. Germany thanked Vietnam's support of the initiative of Germany and France on the multilateralism alliance. Mr. Annen suggested that the two countries work together to contribute to promoting the establishment of the ASEAN-EU Strategic Partnership, bringing cooperation between the two regions to a new, more effective and comprehensive level.

Within the framework of the United Nations Security Council, the two countries agreed to enhance cooperation in solving issues of mutual concern, actively contributing to global peace, stability, cooperation and development.

Germany expressed their concern that the current tension in the South China Sea affects the maritime and aviation freedom and security in the region, and agreed that disputes in Bien Dong Sea (or internationally knownSouth China Sea) be resolved by diplomatic measures with respect to international law, including the 1982 United Nations Convention on the Law of the Sea. 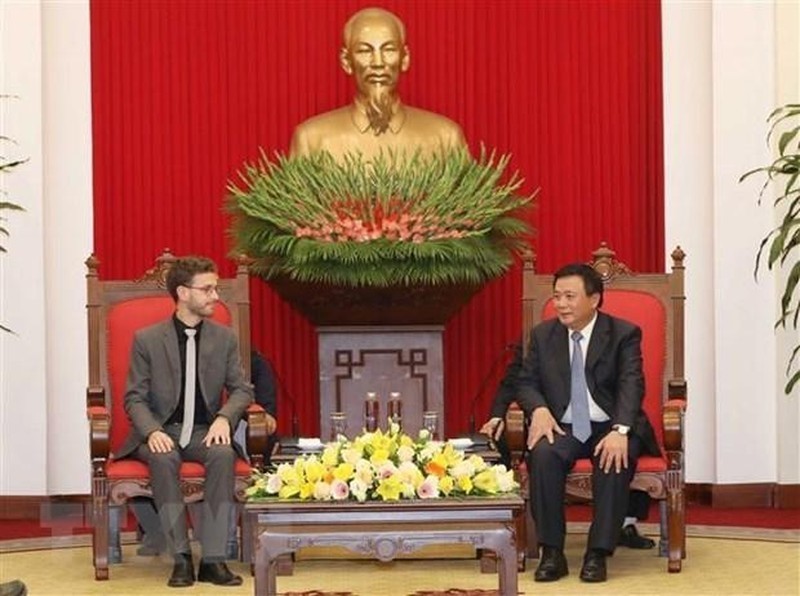