The UK is forecasted to cope with 14 inches of snow to fall as well as wintry conditions. Meanwhile, cold sets to batter in northern and eastern Europe, fair conditions will cover across Iberia.
Ruby Lee
lethanhha8991@gmail.com January 13, 2021 | 15:37

Britain is bracing for 14 inches of snow to fall this week as a ferocious -6C deep freeze hits, according to the latest cold weather charts, Express reported.

A brutal cold front is currently working its way down the UK from the Atlantic, bringing wintry conditions. Scotland is forecast to be battered with 14 inches (33cm) of snow in central areas on Thursday, WCHARTS' latest snow depth models show. Northwestern parts of England, including Cumbria, could also be hit with 5 inches (13cm) on the same day, with the snow expected to linger until next week.

Temperatures are also predicted to plummet as low as -6C in Scotland on Saturday, while Northumberland also shivers with a bitter -5C on Friday and London averages 0C throughout the rest of the week.

Netweather's Nick Finnis expected "disruptive snow" to smash into northern regions of the UK by tomorrow.

He said: "Battle of the airmasses playing out on Wednesday. A warm front will push a band of rain east and northeast across many areas through the day, after a cold and frosty start in the north and east, with a wedge of milder air moving in behind across western areas."

"But as the rain bumps into the cold air across Scotland and northern England, it will turn to snow, mostly over higher ground, where it will settle, but perhaps to lower levels for a time before turning to rain. We are seeing a battle of cold and mild airmasses across Britain this week."

"Rain will push back in from the Atlantic on Wednesday, turning to snow over hills of Scotland and northern England. More rain spreading in on Thursday, falling as snow across the north and northeast as it bumps into cold air here, mostly over hills but perhaps to lower levels for a time, cold across northern and eastern areas but milder in the southwest. Friday a cold day but looks drier across the south, rain and hill snow returning to the north."

The Met Office warned of more snow falling this week, with eastern areas being battered by freezing air.

The forecast said: "Tonight, cloud and rain in southwest returning eastwards and becoming heavy across Northern Ireland, western Scotland and northwest England with a risk of sleet, snow and ice. Cold and clear elsewhere."

"On Wednesday, cold with rain, sleet and snow across northern UK, lasting most of the day in western areas. Further south, rain band moving east followed by milder but rather cloudy weather."

"Outlook for Thursday to Saturday, remaining unsettled with areas of rain and snow pushing east, snow will mostly be confined to the hills. Rather cold in east areas, but generally milder in the west."

The Met Office also issued weather warnings for snow, ice and rain over the next three days across the whole of Scotland, as well as northeastern parts of Northern Ireland and northern parts of England, including Manchester.

The warning stated: “Rain and snow will clear southwards later Monday and overnight into Tuesday, with a rapid freeze following. Some hilly areas will see a further cover of 1 to 3cm snow beforehand."

“Ice will become widespread over northern Scotland from around dusk, much of the rest of Scotland by late evening or the early hours, and across northern England later in the night.”

The BBC's monthly forecast warned this week was expected to turn unsettled with an increased risk of cold air sweeping in.

"This will make for an unsettled and difficult-to-pin-down forecast. There is also a growing risk of cold outbreaks for the second half of January."

"But the coldest weather is expected to stay off to the east. However, there aren't any strong signals at the moment pointing towards a prolonged very cold outbreak for the UK."

According to Weather Online, Thursday is going to be cloudy and wet in the morning, the rain heavy in Northern Ireland, northern and eastern England as well as central and eastern parts of Scotland. There is a risk of sleet and some snow in eastern parts of England, mostly over high ground. Turning drier in the west. Some bright or sunny spells are likely to be developing over Ireland and western parts of Scotland. Windy for a time in England and Wales. Highs at 3 or 4C in the east, 8 or 9C in Wales, southwest England and Ireland.

A fair day in Spain and Portugal. Corsica and Sardinia may have some showers. These showers also affecting southern Italy. The rest of Italy should be dry and bright with more sunny spells. Cloud and rain in southern Greece. More persistent rain in Turkey, snow in central and northern areas.

Cloud and drizzle in much of France, moe persistent rain north and east. Cloud increases in the Low Countries. Breezy in Germany with some rain in the north. Further periods of rain and showers in Poland. Austria, Hungary and Switzerland will be cloudy with periods of rain, snow in Switzerland.

Windy and cold with sleet and snow in Denmark. Further snow in the Baltic States and the south of Finland where gales will lead to blizzards in places. Windy over much of Sweden with periods of snow in central and southern areas. Cold and fair in Norway.

According to Weather Online, fair in Spain and Portugal on Thursday. The Balearics may have a passing shower. Showers in southern Italy. fair with some sunshine in Greece. Turkey will be wet with periods of rain, but snow in the north. Wet through Cyprus too.

Rain and stronger winds in northern France but fair to the south. Sunny spells and dry in the Low Countries, but rain here later. Germany will be cool and dry with sunny spells. Cold in Poland with bands of snow showers moving south. Staying cold with snow showers in Austria and Hungary. More persistent snow across Switzerland.

Cold for Denmark but dry with sunny spells. Snow flurries affeting eastern parts of Sweden. Breezy and cold over the Baltic States and southern Finland with some wintry flurries. Drier for Norway and the rest of Sweden with good spells of sunshine. 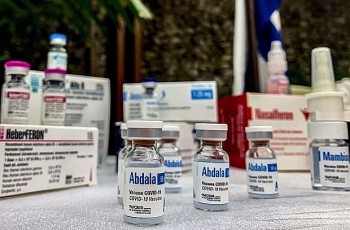 Cuba has exported its Abdala coronavirus vaccine for the first time with an initial shipment to Vietnam.
23:29 | 26/09/2021