Tomorrow most of England, Wales, southern Scotland and the south and east of Ireland and Northern Ireland will have another dry and warm day with sunny spells. Meanwhile, fine and warm conditions are expected in much of central and southern Europe, more mixed Scandinavia and cooler here too.
Ruby Lee
[email protected] March 30, 2021 | 20:00

According to Sky News, tomorrow most of England, Wales, southern Scotland and the south and east of Ireland and Northern Ireland will have another dry and warm day with sunny spells.

It'll be very warm across the south, especially in the south-east where temperatures could locally get close to 24C. However, western Scotland will continue cold with rain, that will also spread across the north and west of Northern Ireland and the Republic. Later the far north of Scotland will become drier and brighter but colder.

The UK is poised for an extended period of warm-weather over the Easter weekend, according to the latest maps, as temperatures rocket to highs of 24C (75F) this week.

BBC Breakfast host Rachel Burden predicted the UK to be blasted with a "mini-heatwave" this week. Met Office forecasters also said the southeast of England could see temperatures climb to 24C on Tuesday. Chief Meteorologist Andy Page said: "In sheltered central and southern parts of the UK, weather conditions will be much calmer with temperatures climbing in the March sunshine to highs into the low 20s, with the possibility of 24.0 C in southeast England by Tuesday." But Brian Gaze, a forecaster at Weather Outlook, warned the warm temperatures may be short-lived as he shared a map suggesting -2C to strike Kent in the south of England on Tuesday, April 6.

Explaining the chart further to Express.co.uk, he said: "The chart shows forecast temperatures at approximately 1500m above sea level. They're used to give an indication of the air mass. Temperatures down at the ground level in Kent would be closer to -2C."

The map also showed temperatures plunging further in the north of the UK on the same day.

In a separate forecast, Mr Gaze added that wintry conditions including snow could even hit the UK as Easter arrives. He said: "Through Wednesday outbreaks of rain spread southwards and they reach central areas in the afternoon."

"To the north much colder conditions develop and showers start to turn wintry. In southern counties it will be another very mild or even warm day. During the rest of the week high pressure builds to the west. That leads to the likelihood of cold air moving southwards over the UK. The risk of sleet or snow could return in time for the Easter weekend."

The BBC's long-range forecast between Saturday, March 27 and Sunday April 4 added: "Next week will start off with a high pressure system that has been building in mainland Europe this week strengthening into the UK, bringing light winds and milder air."

"Temperatures will climb well above average for the first half of the week, reaching into the low twenties for parts of the Southeast. This will also come with dry, largely sunny weather, although northern Scotland will still see weather fronts and some patches of rain. The warmer air will be short-lived though, as a cold front is set to arrive around midweek."

"There is still some uncertainty on the exact timing, but the front should sweep southwards across the UK either Wednesday or Thursday afternoon. The colder air mass behind the front will be a stark difference from the very mild air it replaces, with afternoon highs dropping as much as 10 Celsius is some places!"

"Heading into the Easter holiday weekend, the weather will likely be a few degrees colder than normal but largely dry with patchy cloud. There is a chance of some scattered showers for northern and eastern areas, and these could bring some lowland snow if they develop."

The Met Office added temperatures could start to become warm again during the middle of April.

The forecast between Friday, April 3, and Sunday, April said: "Widely fine conditions are expected across the British Isles on Friday and Saturday with plenty of dry weather and sunny spells for most."

"Temperatures will be around or a little below average for the early part of April, with some chilly nights. It will likely turn colder and more unsettled from the north by the start of the following week. All areas of the UK are likely to see spells of rain and stronger winds."

"Some wintry showers are possible too though any snow is most likely over hills in the north of the country. After a colder spell, temperatures will probably start to return back closer to average towards the end of this period."

According to Weather Online, another very warm and fine day to come across much of England and Wales. It should be dry here with good spells of sunshine. A week front lines through Ireland and southern Scotland. This is going to bring cloud and periods of rain here, most of that rain being light. Staying down to cross central parts of Scotland and much of Northern Ireland too. The far north of Scotland is likely to be dry. A cold day in Scotland and Ireland. Highs at 24C in southeast England, 6C in northern Scotland.

Most of England and Wales will be fine, warm and dry, sunniest skies in the southeast. Cloudier across Scotland and Northern Ireland with some rain at times, Met Office reported.

Largely dry with sunny spells for most. Still very warm in the southwest on Thursday, otherwise temperatures around average with chilly nights. Cooler and cloudier at times in the east.

Sunny spells and scattered showers across Portugal as well as western parts of Spain with brisk winds towards southern coasts, but largely dry and fine elsewhere. Dry, fine and warm through the Balearic Islands and much of Italy although far southern regions once again could see the odd isolated shower or two. Showers continuing across Greece and Turkey.

Dry, sunny and warm across much of northern and central Europe, although Poland will see some patchy rain and cloudier skies across eastern areas through the morning before clearing here. Slovakia and Hungary will too see cloudier skies with possible light rain/drizzle across easternmost regions for a time.

Winds should ease across Norway but a mix of rain, sleet and snow will continue across northern and western regions here. A mostly dry day with sunny spells for Sweden. Less windy here. Rain across eastern Finland first thing will soon clear to see a dry day thereafter. A dry day across the Baltic States with a steady south-westerly wind. Dry and fine across Denmark.

According to Weather Online, mosty fair and sunny across most of Spain and Portugal today. There will be lots of warm, spring sunshine in the Balearics and through Corsica and Sardinia too. Staying sunny and dry in Italy. More unsettled conditions with wind and rain for Greece, this heavy and thundery. Heavy showers, some thundery in central and southern Turkey but drier to the north.

Denmark is going to be dry and sunny. Breezy for the south of Sweden but dry, More sunshine to come in the Baltic States. Finland will be cooler with some showers here. Cooler too in central and northern Sweden. Some rain will be affecting the western coasts of Norway. 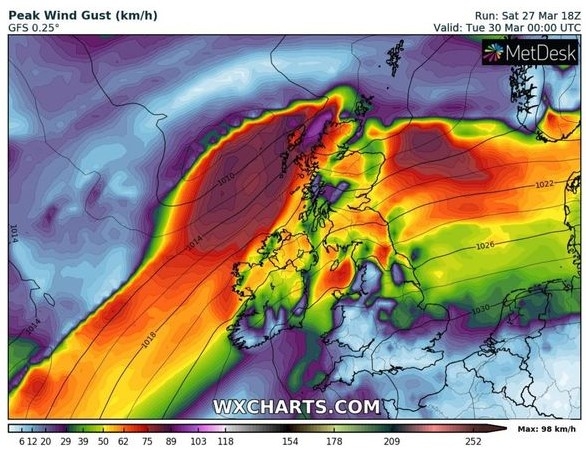