Many passengers applaud the creativity of the flight instruction video that Vietnam Airlines has recently introduced on their flights. This video not only creatively conveys the message of flight safety but also helps to spread globally the unique, indigenous cultural values ​​of the country and people of Vietnam.
Tracy Dao
August 10, 2022 | 10:19

Every flight is an opportunity to introduce Vietnam

According to aviation regulations, flight safety instructions are a mandatory requirement in every flight to ensure the safety of passengers. Airline safety movies and live guides always put safety first, with basics like how to fasten your seat belt, stow hand luggage, use life jackets, exit, or the regulation of no smoking on the flight...

For many years being highly rated by passengers for its safety and quality, the national airline of Vietnam is always concerned about the mission of turning each flight into a cultural bridge, introducing to international and Vietnamese passengers the charming and majestic landscapes, and the cultural and indigenous beauties of Vietnam.

Because of that, a very creative flight safety instruction video was introduced.

The context might be the most invested in this video. Viewers can easily recognize images of many unique tourist attractions stretching across the country such as Pu Luong's terraced fields, mountains, and forests of the Central Highlands, Dong Thap lotus ponds with traditional melodies such as bamboo dance, handheld fan dance, etc. Costumes are designed specifically for each dancer and are inspired by the materials and textures of costumes of many ethnic groups in Vietnam. Sophisticated costumes, combined with flexible dance movements and gestures, become an important factor to attract the audience.

Nguyen Cam Thi, a tourist from Hanoi, said: “This video is so meticulous and creative. To be honest, the footage has shown a lot of the beauty of Vietnam. My Korean partner on the same flight even squealed with excitement and kept asking me where the scenes in the video were filmed”.

Thu Hien wrote on Vietnam Airlines's Facebook page: "I think this is a very subtle way of promoting culture. This video is no different from a tourism publication that has satisfied both the look and the sound. I was very impressed by the creativity in integrating the image of the country and people of Vietnam”.

In the video, there are many unique scenes filmed across the nation. One of the most impressive scenes is the gong dance around the fire at night, bearing the identity of the Central Highlands. The informative elements such as how to put the luggage, and how to turn off the transmitters are put into the context in a clever, attractive way without causing boredom. This can be explained that indigenous culture always attracts the curiosity of visitors when discovering a new land.

In addition, the panoramic views from the top are also very attractive, when describing the exits, and when taking the scenes on the water surface of Pu Luong waterfall and Dong Thap lotus pond. The objects, movements, and costumes are cleverly and rhythmically arranged to create a high visual effect, bringing strong emotions to viewers.

All the boring and strict guidelines and regulations are now reaching passengers through soft, young, artistic, and cultural videos of Vietnamese ethnic groups. These videos also introduce to international friends a really beautiful Vietnam with many cultural imprints and natural scenes.

Through this flight safety instruction video, Vietnam Airlines wishes to introduce the tourism potential, and the beauty of the country and people of Vietnam, thereby contributing to promoting domestic and international tourism. At the same time, the airline affirms its efforts to constantly improve the flight experience with breakthrough, modern, youthful changes that are still imbued with national identity.

Truong Trong Tan, Director of Photography of this video said: “This is one of the most difficult projects that the crew has ever participated in with two years of pre-production, surveying, and carrying out in many provinces and cities across the country to find the right options for the scenes. Difficulties are many, in which the weather factor is very important when there are many stages and scenes that the crew has to perform in heavy rain weather”.

This is not the first time that Vietnam Airlines has promoted cultural values ​​on their flights. Over the past 20 years, each flight has served as an information channel to spread cultural messages to domestic and international passengers.

The airline had campaigns to promote Vietnamese agricultural products to passengers on domestic and international flights, where Thanh Ha lychees, Cao Phong oranges, and regional specialties are respectfully sent to passengers when given the opportunity.

Vietnam Airlines is also marketing and promoting Vietnam to friends around the world with many activities, including cooperation with SpaceSpeakers Group to spread the culture and music of the young generation of Vietnam to passengers, especially international friends.

Recognizing the role of each flight, besides the safety of service and cultural promotion activities, domestic airlines have built ways and become creative in being a cultural connection channel for international tourists.

Le Hong Ha, General Director of Vietnam Airlines said that the Vietnam National Administration of Tourism and Vietnam Airlines defines the way to promote tourism from 2020 to 2022 will be based on the identity, core values, ​​and service provision to maximize convenience for passengers, especially tourists. 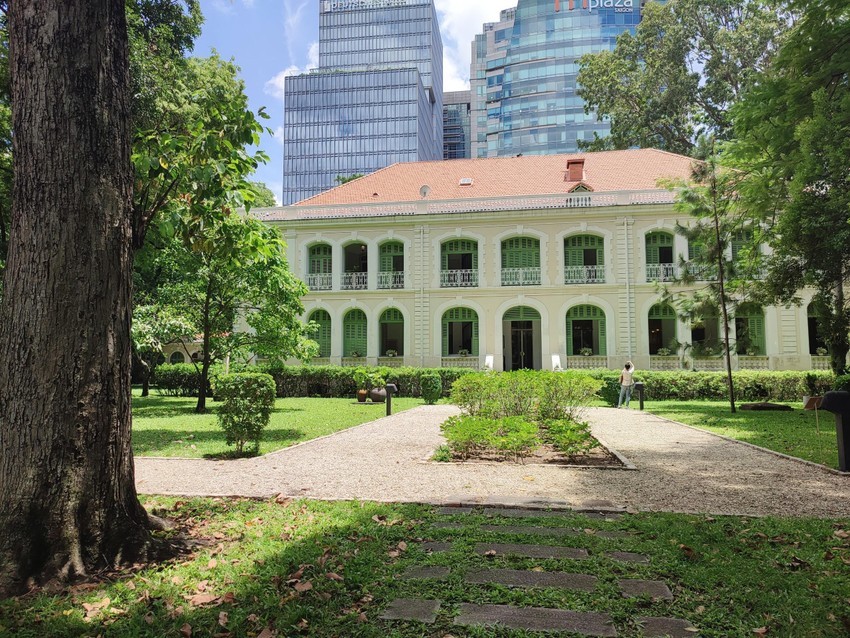 The Mysterious Appeal of the French Consulate General's Residence

Countless people have expressed their regret at not being able to visit the 150-year-old French Consulate General's residence, which is only opened once per year.
September 20, 2022 | 12:49
Phiên bản di động