The 77th anniversary of the August Revolution, the National Day of September 2, and the achievements of the 31st Southeast Asian Games hosted in Vietnam are being commemorated by the football competition, which is being organized by the Vietnamese Association in Moscow, Russia.

The top four teams from each group were chosen to advance to the next round after the 14 participating teams were split into two round-robin groups. Then, two pairs will be chosen at random to compete in the final in a knockout format for the matches. The competition will complete on August 10.

Dang Minh Khoi, the ambassador extraordinary and plenipotentiary of Vietnam to Russia, spoke at the occasion and expressed amazement at the number of football stadiums taking part as well as the energetic atmosphere on the first day. The football competition should be professional cohesion, with comradery, and in a way that reflects the solidarity, and unity of the Vietnamese people in the Russian Federation, according to ambassador Dang Minh Khoi.

The participants received well wishes from Ambassador Dang Minh Khoi, who also wished for the competition to be "very nice, fair, and united."

A healthy playground is created for the movement of sports in general, and football in particular, by the community football tournament, according to Tran Phu Thuan, Standing Vice Chairman of the Vietnamese Association in Russia and Head of the Organizing Committee. Thus, Vietnamese nationals who reside and work in the Russian Federation will have greater understanding and unity.

The Moscow Brothers team and FC Friends, as well as the Moscow Youth squad and the Song Lam Nghe An team, played two thrilling matches just after the official opening ceremony. The encounter between the Moscow Brothers, the tournament's defending champions, and FC Friends was played in an outstandingly appealing manner with numerous tumultuous episodes in front of both teams' goals.

The two busiest markets in Russia, Lyublino and Sadovod, with the highest concentration of Vietnamese residents, attracted a sizable number of Vietnamese people who came to watch and support the players. 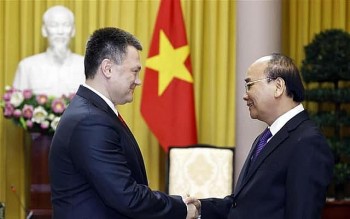 The Prosecutor's Office of Russia will help train officials and prosecutors for Vietnam, said the Prosecutor General of Russia.
11:27 | 05/10/2022

Vietnam hopes the US will help the country develop general education and creating a firm foundation for the training of high quality human resources in the country.
September 26, 2022 | 12:01
Phiên bản di động