Fighting against the enemy has long been the right and duty of any Vietnamese citizen. With the advent of COVID-19 pandemic – the current enemy that the Vietnamese government and people are fighting against –many so-called “anti-COVID-19 weapons” have been initiated by the government, enterprises, students, artists, engineers, farmers, etc.
Jasmine Le
lehang1997hanu@gmail.com June 28, 2020 | 07:05

Vietnam Times would like to give you a closer insight into some of those “weapons”.

In the fairy tale world, the Fairly Man would always show up to offer help when someone is in the deepest despair. In Vietnam, real-life Fairly Man has appeared in time to help a lot of families and residents whose lives have been disrupted by the COVID-19 pandemic. The so-called Ông Bụt Gạo, or the Rice Fairy Man, is the name Vietnamese people given to the Rice ATM.

The advent of the COVID-19 pandemic has halted social activities and “frozen” the economy. Under such a condition, poor people - whose livelihood is vanished amid coronavirus – are the ones to suffer the most. At this exact time when “the tattered leaves” need protection from the “intact ones” the most, the novel Rice ATM made a debut.

Rice ATM is an initiative built on not only scientific and technological expertise but also the compassion of human beings.

The first Rice ATM, which dispenses charitable rice for poor people was installed at 204B Vuon Lai Street, Tan Phu District, Ho Chi Minh City, Southern Vietnam on April 6. A few days later, the initiative gained popularity within the city and quickly replicated across the country.

“Don’t let anyone surrender the hunger”

Hoang Tuan Anh, 35, is the man behind the idea. Tuan Anh is the CEO of the PHG Lock, an electronic lock company in Tan Phu district, Ho Chi Minh City, Thoi Dai reported.

Being a young man who was born and raised in a well-off family, Tuan Anh learned about the value of labor from his parents since small. “The first Rice ATM location used to be my family’s farm in the past. When I was still a kid, I followed my dad from District 5 to the farm to do manual work such as bathing and feeding cows or cleaning their cages, etc. Therefore, I could understand the suffering of those in needy situations since those early days. I really appreciate and feel thankful for their hard work”, Tuan Anh said, adding that it’s this understanding that motivated him to share part of the burden with the residents during the COVID-19 time.

Asking about his reasons to start the project, Tuan Anh said “I don’t want to see someone else giving up on their lives because of hunger. I don’t want to see a starving child stealing loaves of bread on the street. It’s best to do something to relieve their hunger and prevent them from embarking on the wrong path”.

In early April, the whole world entered a crisis due to the adverse effect of the novel disease. The number of confirmed infections was increasing, the global economy became stagnant and took a heavy toll on a large number of companies around the world. Tuan Anh’s company was not an outlier.

“Thinking back though, I still find myself a lucky one. There are many people out there selling lottery tickets one day and can only work in restaurants, coffee houses instead in the next day. Now that all those services come to a halt, what else can they do to earn a living?”, he added.

With this in mind, Tuan Anh immediately started his project, hoping to give free rice to the poor to help them overcome the immediate hunger. However, he encountered the first obstacle. Since the nationwide social distancing order was in place across the country, he could not ensure the safe distance as required if he were to directly distribute rice to people.

“There must be a solution to remotely delivery the rice and somehow make sure one person should take one rice bag each day”, he shared. “The idea of a Rice ATM immediately flashed across my mind”.

The design of the dispensing machine was completed within only 8 hours. Tuan Anh utilized the equipment available in his company's warehouse and drew on the experience he accumulated. With the assistant of three technical staff, the 35-year-old finished his first rice dispenser within one day.

It includes an automatic rice dividing system, facial recognition system and buttons controlled by a phone application, and costs him VND 10mil (US $425) to make. When someone in front of the camera presses the button, the valve automatically opens, around 1.5 kg of rice from the tank flows down the pipeline.

He also sets up several resilience cameras around to keep security, marks each standing place at a safe distancing that meets social distancing rules. Moreover, hand sanitizers are placed right next to the dispenser so that everyone can wash their hand before using the machine.

The rice dispenser can be used 24 hours a day to avoid mass crowding and is designed to ensure the capacity of 3,000 people per day.

Tuan Anh intended to distribute 500kg of rice per day until the end of April, however, his Rice ATM model was well received and multiplied across the country.

Hundreds of benefactors came to the site to donate rice.

From its first model in Tan Phu, the Rice ATM has been replicated beyond the initial estimation. Thanks to the financial support from sponsors, a total of 60 Rice ATMs were installed nationwide within 20 days.

It’s estimated that 20,000 tons of rice have been freely distributed to residents in different cities and provinces throughout Vietnam each day. The installation of 60 Rice ATMs cost over VND 1 billion (US $43,060).

5 days after the debut of the first Rice ATM in Ho Chi Minh city, on April 11, the Rice ATM project for the poor was duplicated in Hanoi.

Nguyen Manh Hung, 55, who brought the idea to Hanoi, said “After reading the news about the Rice ATM in Ho Chi Minh city, I thought to myself ‘It can be installed in Ho Chi Minh city, why can’t it be in Hanoi?’. I’m running a charity group specializing in books, when I shared this idea with the members, everyone agreed with the idea. So we started working on it”.

“Technology is not my forte, thus I turned to Facebook to ask for help and received a lot of advice and support. People joint their hands to help me carry out the project”, he added.

The first grains of rice were poured out to the poor Hanoians at 8:30 am on April 11. The machine was installed at Nghia Tan Cultural and Sports House, Cau Giay district, Hanoi.

Hung’s Rice ATM was completed after almost two days with some modifications. With the new one, people would use their foot instead of hands to press the button, notifying the machine to dispense out rice.

“Pressing the button with hands might spread the virus, while you know, with the foot, we can reduce the infection risks”, Hung emphasized.

Giving out rice, taking back love

Wandering around Nghia Tan ward, Hanoi, to scavenge on a daily basis to make ends meet, Tran Thi Lanh, 62, cycled her bike to the Rice ATM site to receive free rice immediately after hearing of the free-rice-taking news. At that time, her family had been struggling to have a full meal for days, therefore, the free rice she got from the Rice ATM was a lifesaver for her whole family.

“Our life is tough already, now that the COVID-19 breaks out, we can’t go to work, we’re struggling a lot. We’re glad to take the free rice home like this”, she told Thoi Dai with a bag of rice on hands, adding that the 3kg of rice she’s just received can feed her family for 2 or 3 days. 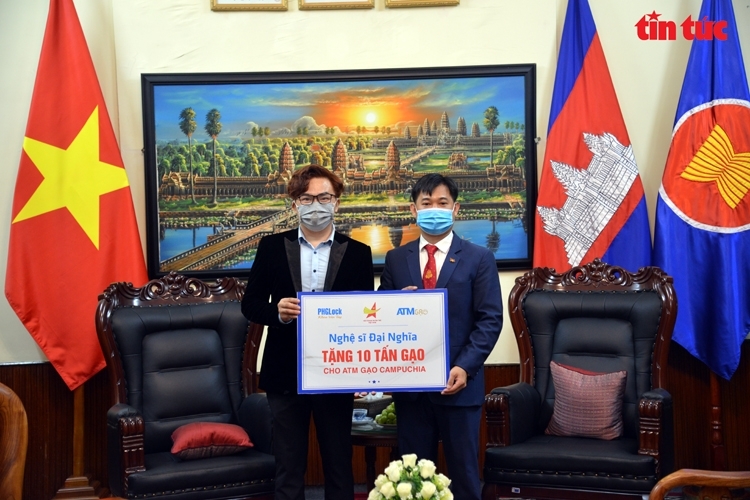 Celebrity Dai Nghia and the Vietnam Young Entrepreneurs Association just donated 15 tons of rice to support Cambodian people in the fight against the Covid-19 pandemic.
May 16, 2021 | 11:54

The Rice ATM, first initiated by a young Vietnamese amidst the COVID-19 pandemic, has gone beyond borders to reach a number of Southeast Asian countries and vinicity . Many states in India on December 29 were also reportedly imitating the model to dispense free rice to those in need.
December 30, 2020 | 13:59

Two international researchers from academic institutions in the UK recently wrote an article on The Conversation to discuss how Vietnam can be so successful in the fight against the COVID-19 pandemic in both first and second waves of its attacks.
September 26, 2020 | 07:37 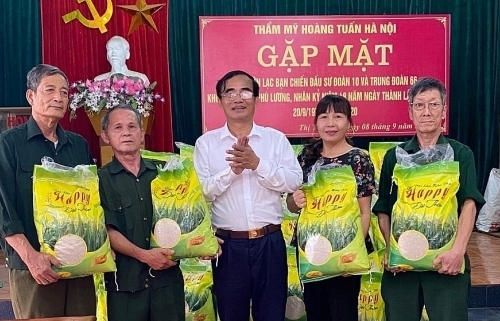 After the success of the Noodle ATM, Dr. Hoang Tuan continues to launch the Rice ATM program, donating some 30 tons of rice to impoverished areas across the country.
September 25, 2020 | 15:53