"Technology was a tool that would give him better visibility over what was happening at the company", Tan Hiep Phat Group Deputy CEO Phuong Uyen Tran shared about her father's vision to ensure transparency and consistency across the THP.
Phuong Uyen Tran
February 07, 2021 | 22:48

At THP, the need to start putting processes in place became clear by the late 1990s as growth really started to ramp up. Prior to that, everything had been centralized under my mother and father. They were signing off on every decision, and the paperwork had become overwhelming.

Anh "paperwork" is the operative word here, since Vietnam was and still is a country where bureaucrats remain wedded to stamping and chopping documents. Banks, for example, require documents to be signed by hand and in blue ink.

My father realized something needed to change, and he signed up for a management course with my mother and his childhood friend, Uncle Tư. This was when he first learned about ISO standards; he quickly decided THP needed to follow suit.

Implementing ISO was a very hard cultural change for the whole company. One of the most important steps in the ISO process lies in documenting what tasks each worker performs. This was particularly hard for some of THP's manual staff. They were used to operating machines, not pen and ink.

But it was an incredibly important first step in "professionalizing" the company. Once each worker's tasks and processes had been documented, it was possible to see where the gaps were and which workers were falling short.

THP also now had a blueprint to train everyone across the company to the same standard. The company was on its way to becoming the best-pratices and processes-driven company it is today.

THP also uses technology to ensure transparency and consistency across the company. Since the 1990s, IT systems have revolutionized the ways businesses are managed. But they came late to Vietnam, and it was only in 1997 that my father purchased his first computer: a laptop. No one else at THP had one then.

This was also a time when the currency was still all over the place, so the computer's cost—just like everything else of value in the country—would have been considered in terms of how many gold bars it represented. Plus, owning a computer is not much use if you do not even know how to switch it on.

So, my father organized IT training for senior staff members. Once again, he quickly concluded that technology was a tool that would give him better visibility over what was happening at the company. So less than two years after he got his first computer, he decided to implement enterprise resource planning (ERP) using BAAN software. This is the integrated and electronic management of core business processes. It gives companies one source of the truth rather than multiple, disjointed ones spread over different departments.

Many companies have rolled it out, but few have probably revolutionized their operations quite as fast as THP. The project director who came to implement ERP had previously worked for Carlsberg. She said it was like going from a bike to an airplane in one fell swoop, missing out on the motorbike and the car in between.

On the occasion of its 23rd anniversary, Tan Hiep Phat hosted a special networking event attracting hundreds of customers and suppliers. The idea of hosting the gathering stemmed from the process of writing the book; in the process of collecting material, the author had learned from the group’s founder the philosophy of sharing opportunities and benefits with colleagues and partners, according to VIR.

Phuong Uyen Tran's father’s will is turning Tan Hiep Phat into a powerful group with global reach. Managing a business, particularly a family business, toward sustainable development has proven a hard task, even harder than managing a public company.

In Thanh’s mindset, Tan Hiep Phat must follow international management practice with a high level of professionalism, with no place for personal sentiment.

All company members must observe set principles and policies, as transparency should bring opportunities to everyone, and market rules will moderate resources and decide each product’s fate.

According to Thanh, transparency and competition are the very factors helping to protect the customers’ benefits. Therefore, at Tan Hiep Phat all the programmes valued at VND400 million ($18,000) or higher are up for open bidding to ensure transparency.

Commenting on the current startup boom, Thanh said a business needs multiple factors to reach success, such as capital, technology, equipment, and experience. If a firm only possesses one such factor, it’s important to create synergies and co-operate to reach success. 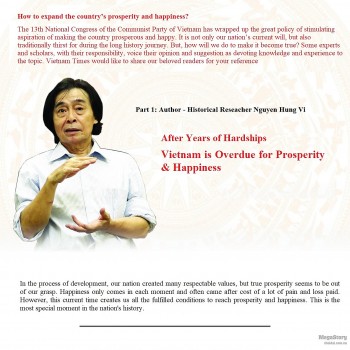 During the pandemic, a corporation should choose either to 'hibernate' (close factories) or take on the fight, said Hoang Tien Nam, CEO of FPT Telecom, one of Vietnam's largest ICT companies. FPT does not hibernate as the citizens need the internet now more than ever. Tan Hiep Phat Group also chose to stay on to provide consumers with healthy, beneficial drinks.
August 24, 2021 | 16:28
Phiên bản di động