First of all, "Cheap Beer" is one of those charming invitations from the city as anyone can immerse themselves to the local atmosphere sitting on some small plastic stools on the sidewalk and enjoy the world’s cheapest beer, with a bottle of Saigon or 333 costing just around VND10,000 (US$0.5). "From back alley dives to four story canal-front joints, a dirt-cheap, ice-cold glass of beer is never far away," Roth said.

The second reason should be "Complex food" as Vietnam has been well-known to the world as a food paradise with a diverse and delicious range of cuisine, Saigon's delicacies are a factor creating that complexity. "Ditch the brick and mortar, and grab a bite at one of the city’s famed food carts for a more authentic feel. They’re open at all hours and can be found in every neighborhood."Said the author.

Vietnamese coffee has been praised widely on international media for its taste and the way it is made with domestic brandings seems to increasingly gain popularity across the world. And it is undeniable to be a reason for a tour to Ho Chi Minh City. When it comes to Hanoi, you should try Egg Coffee, however, Ho Chi Minh city offers visitors with its simple Iced Milk Coffee.

"The Stunning Transformation" is also a plus that make Ho Chi Minh city attrative as catching the sunset at the beach is a fantastic idea, but watching the sun goes down from skyscrapers is not a bad experience. Many high buildings have been built these days in Saigon, so you can go to the top floor of a building such as Landmark 81, Panorama,… etc to see the whole city.

Bui Vien Street is known as the ‘backpackers area’ of the metropolis, which provides a wide range of affordable restaurants, bars, souvenir shops, and hotels/hostels. Bui Vien is an ideal place for non-stop parties, but with those who want to be a spectator, Bui Vien can also offer.

Besides, some experiences that could draw the love of foreign travelers to Ho Chi Minh City are the neighborhoods, rooftop bars, motorbikes, markets, saving money, and action of economic boom. 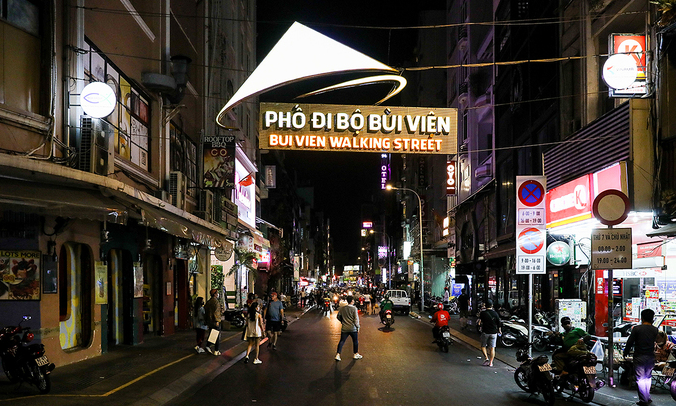 Business owners on Bui Vien pedestrian street in downtown Ho Chi Minh City are suffering from a lack of customers due to the impact of the COVID-19 pandemic.
April 05, 2021 | 10:50 The Mid-Autumn Festival is not only a significant festival for children but also an opportunity for the family members to gather. Besides celebrating the festival at home, going out to enjoy its bustling vibe is also an ideal alternative among many people. Let take a look at some destinations to celebrate the Mid-Autumn Festival in Ho Chi Minh City.
September 19, 2020 | 11:19 Thai Beverage Public Co. Ltd. (ThaiBev) has rejected rumors that it was seeking a buyer for Sabeco, the largest brewage company in Vietnam.
May 31, 2020 | 15:55