On Tuesday, the minimum temperature recorded over Shivajinagar was 16 degrees, at Pashan it was 17.2 degrees and at Lohegaon it remained 18.9 degree Celsius.

Day time temperatures, too, are above normal for this time of the year. The India Meteorological Department (IMD) has forecast hotter days with mostly clear sky conditions ahead. The maximum temperature on Wednesday is likely to be 36 degrees and the minimum to be around 17 degree Celsius.

For the past four days, the city air has remained fairly good. On Tuesday, the city’s Air Quality Index (AQI) was ‘satisfactory’ at 84. The AQI for the city, according to the SAFAR forecast, will be 95 on Wednesday, The Indian Express reported.

According to Weather.com, a cyclonic circulation will produce isolated snow/rain over Arunachal Pradesh and the adjoining area. This activity will show a modest increase in its intensity towards the weekend. Overall, precipitation of up to 35-50 mm is likely for the next five days.

A feeble western disturbance is set to affect the weather across the Western Himalayan region (WHR) from Tuesday. Under its influence, isolated to scattered rainfall/snowfall with isolated thunderstorm/lightning are likely over Jammu, Kashmir, Ladakh, Gilgit, Baltistan, Muzaffarabad, Himachal Pradesh and Uttarakhand on March 3, the India Meteorological Department (IMD) has predicted. Further, it has also issued a yellow watch over the WHR of Wednesday.

The snow/rain will subside on Friday, but increase once again from Saturday due to another disturbance following directly. That second successive system is expected to cause scattered to fairly widespread rainfall/snowfall activity over the region during March 6-8, with maximum intensity on March 7.

Meanwhile, isolated to scattered rainfall with peak thunderstorm/lightning is very likely over Northeast India during the next 4-5 days. Accordingly, the IMD has issued a yellow watch over the region for this forecast period.

Overnight minimums will be warmer than normal across much of the country during this forecast period, with the exception of Deccan Plateau, where the temperatures will remain normal or slightly cooler. 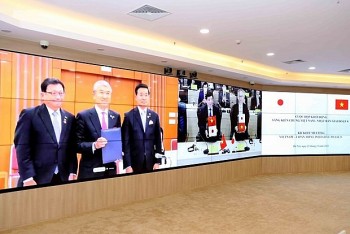 The Vietnam-Japan Joint Initiative continues into its eighth phase, focusing on improvement of legal frameworks and market reformation.
19:38 | 25/10/2021

Ex-Big tech owners are taking advantage of this social media transition time as a unique opportunity by spreading the word, unveiling a message of the true hidden terror of social media for someone who needs to see it. Along with a documentary investigation and narrative drama to disrupt the disrupters, unveiling the hidden machinations behind everyone’s favorite social media and search platforms.
October 21, 2021 | 17:13
Phiên bản di động