The awards, organized by The Korea Times, are aimed to encourage students from multicultural backgrounds in the country who at times experience hardships due to cultural barriers and discrimination.

"I was born in Vietnam and raised there until the age of seven. This is something that makes me stand out among others, leading to more opportunities, for instance, the chance to win this grand prize," Kim, who was born to a Korean father and a Vietnamese mother, said during an interview with The Korea Times.

Many people would assume that Kim's multicultural background gifted her with a bilingual talent, but she did not speak any Korean before entering elementary school here. Grasping the language was the first challenge she encountered in her father's homeland.

She often travels some 160 kilometers back and forth by train every weekend from her school dormitory in Asan, South Chungcheong Province, to her home in Seoul.

Spending hours on the road weekly is no burden for the sophomore at Chungnam Foreign Language High School, who says she is happy to study at "the only high school in the country offering in-depth classes in my mother's language, Vietnamese."

"With low confidence in speaking, I used to be a shy girl in the class, keeping to myself," Kim recalled. "But with the help of friends, teachers, and my supportive mother, I was able to acquire the language quite easily."

The soon-to-be high school senior is now trying to balance her time between academic life and social activities. Although she feels that it is time to concentrate on preparing for the national college entrance exam, experiences outside the classroom are also an important part of Kim's energetic life.

"Hae-young participates in so many activities in and outside of the school. She signs up for basically every event, competition, school project, and club activity that she can. It's remarkable that she manages all those while maintaining good grades," Kim's homeroom teacher Kim In-soo shared.

He added that Kim is a self-motivated student with many achievements under her belt and she has a lot of potential.

Kim has a long list of accomplishments ― a former member of the youth assembly at Seodaemun-gu in Seoul where her home is, a student ambassador of the Dokdo Islets, a volunteer at the Korea-Vietnam Culture Communication Center, and the leader of a business administration study group and multicultural volunteer club at her school.

But Kim was not always an extrovert. There were times when she struggled due to a sense of not belonging in either Vietnam or Korea.

"Since I was born as a Korean national, I was technically a foreigner in Vietnam. But I also felt left out in Korea when my friends asked about my nationality, sometimes treating me like a person who will eventually go back to where I was born."

But Kim was able to overcome these difficulties through interaction with other multicultural children who were experiencing similar feelings.

"I met a lot of new friends from diverse family backgrounds in social contribution programs of a local company that I participated in at the age of 13, where we shared the difficulties we had in common. The feeling that I'm not alone helped me gain confidence and accept myself the way I am."

Based on her experience, Kim suggested the establishment of a mentoring platform among multicultural youth across the country, as the problems that such students experience can be eased significantly by communicating with peers in similar situations.

"The platform will offer more than just emotional support. Many multicultural teens are deprived of information in terms of education and career development. Through mentoring programs, we can share useful information on studying Korean, scholarship programs, special college admission tracks offered for biracial students, and other opportunities for self-development."

She discussed her ultimate goal ― to become a social entrepreneur and bring a positive influence to society.

Kim's dream is to major in business administration or economics at college, and then run a business of her own to bring social contribution programs to children with diverse family backgrounds.

"I feel overwhelmed by the recognition and awards I receive for just being who I am. The best way to give back, I think, is to provide support for children from multicultural families in the future," Kim said. 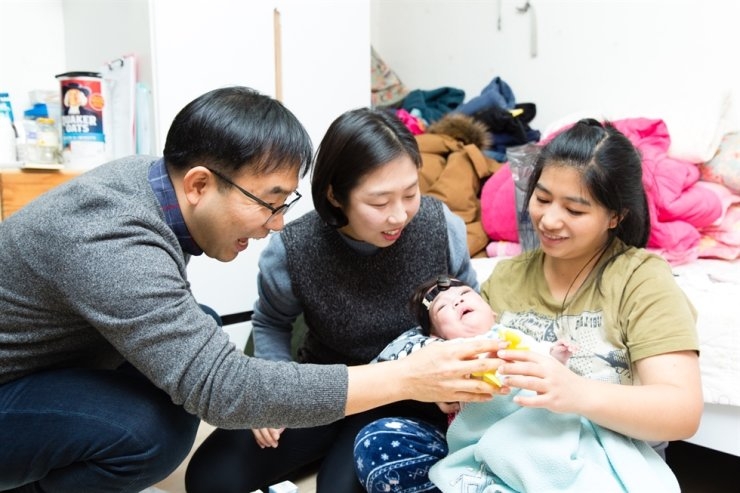 A couple in South Korea has opened a coffee shop with Vietnamese dishes in order to provide economic and emotional support for single foreign parents.
July 24, 2021 | 14:46

Unable to return to Vietnam, Ha Phuong, a Vietnamese-origin singer whose husband is the wealthiest Vietnamese in the US, has donated more than 1,000 gifts and cash to people in need in Ho Chi Minh City, Binh Dinh and Nha Trang (Khanh Hoa).
September 27, 2021 | 16:14