Salad Caprese, Oliver, Caesar, Som Tam (Gỏi đu đủ in Vietnam)... are salad appetizers that are loved by many around the world.
Hannah Nguyen
ngminhphuong26@gmail.com August 17, 2021 | 07:27

Taste Atlas has listed the top 10 salads voted by readers around the world on the site.

Originating from the Dutch term koolsla, meaning cabbage salad, coleslaw is nowadays a true American staple and a side dish that's often served with barbecued meat or fried chicken. Originally, it was brought over to New York state in the 18th century by the Dutch settlers.

It consists of shredded cabbage, mayonnaise, carrots, buttermilk or sour cream with vinegar, sugar, and other seasonings, depending on the cook and regional variations. Some variations have other ingredients such as salad dressings, celery seeds, grated cheese, pineapple, or peppers.

The iconic Caesar salad was named after its creator Cesare (Caesar) Cardini, an Italian immigrant who lived in San Diego but, circumventing Prohibition laws in the United States, operated a popular restaurant in Tijuana, just south of the Mexican border.

Back then, in the 1920s, during the Prohibition era, Tijuana was flourishing as many Californians, including Hollywood jet set, would often drive over to party and enjoy the good life. And just like it was the case with many other world-famous dishes, Caesar salad was invented through sheer ingenuity and improvisation.

Greek salad, also known as village salad or horiatiki is the national dish of Greece, consisting of quartered tomatoes, sliced red onions, and chunky slices of cucumber. Depending on the region, there can also be olives, green peppers, capers, feta cheese, oregano, salt, pepper, or a typical dressing made from olive oil and lemon or vinegar.

When feta cheese is present in the salad, it is usually just sliced, but in some cases it's mixed in with a fork until slightly crumbled. Its name suggests that it was a rural dish, when farmers would take some essential ingredients to the field and mix them together.

Nothing embodies the essence of summer in southern Italy like vibrant colors of the flavorful insalata Caprese, a true classic of Neapolitan cuisine. The perfect combination of ripe, sun-kissed tomatoes, creamy mozzarella and fresh basil - this simple salad is believed to have originated on the island of Capri, hence the name.

Caprese was originally made with the Re Umberto or Fiascone tomatoes, traditionally grown along the beautiful Amalfi coast, and treccia di Sorrento, a type of braided mozzarella cheese. Also, contrary to popular practice, the authentic Caprese salad recipe doesn't call for balsamic or any other type of vinegar.

Som tam is a green papaya salad mostly associated with the northeastern part of Thailand (Isaan), though it is often suggested that it first appeared in Laos. Apart from thin strips of green papaya, this salad usually includes roasted peanuts, green beans, tomatoes, and a tangy sauce typically made with garlic, chili peppers, fish sauce, dried shrimps, palm sugar, and lime or tamarind juice.

The varieties are plentiful and can include various additions. The sauce can also appear in many other combinations, and can significantly vary in sweetness and spiciness. Numerous restaurants and street stalls allow the customers to choose the variety they prefer and adjust the ingredients to their preference.

It is still not clear whether this refreshing dish was invented in the north of Thailand, more precisely the Isaan region, or is it an original Lao creation. Many believe that it was primarily invented to utilize abundant papayas and that its original form did not use palm sugar because it mostly relied on spicy chili flavors.

Regardless of its origin, this simple salad has gained global popularity and can be found on the menus of traditional Thai restaurants around the world. It can be enjoyed as the main dish or as a complement to rice, grilled meat, or marinated fish.

In Vietnam there are two versions of green papaya salad, first version is made with thinly shredded green papaya, carrot, with fish sauce, lime juice and sugar. This is an important street food of Vietnam, where they serve this dish topped with spiced beef jerky. Other versions contain vinegar, chili, garlic, roasted peanuts and with fresh herbs like coriander leaves, Thai basil and Vietnamese mint. Thai version lacks any fresh herbs which is included in Vietnamese version.

Usually an obligatory element of the Hawaiian plate lunch, macaroni salad is a slightly tangy, sweet, cold salad consisting of overcooked elbow macaroni pasta dressed with milk-thinned mayonnaise. The pasta must be overcooked as it helps absorb the dressing.

Just like most popular dishes, there is a wide variety of regional versions that include added ingredients such as tuna, tomatoes, onions, parsley, garlic, salami, bell peppers, or shredded chicken. Apart from its token presence in the Hawaiian plate lunch, it is commonly served as an accompaniment to fried chicken or barbecued meat.

Tabbouleh is a colorful Lebanese national dish that is usually considered a salad, with a crunchy and chewy texture, made with fresh, finely chopped parsley leaves, olive oil, bulgur wheat, and chopped mint leaves as a base. It originated in the mountains of Lebanon and Syria, where edible herbs that are used in tabbouleh were consumed by Arabs since Medieval times.

Usually served as an appetizer, it is sometimes accompanied by pita bread, baba ghanoush, or hummus. Chopped red tomatoes, diced cucumbers, fresh lemon juice and minced onions can be added to the salad, imparting a tangy flavor. It is best to refrigerate tabbouleh for a few hours before serving to improve its taste.

Olivier salad is a Russian salad with variable ingredients, but it is typically made with chopped vegetables, meat, and mayonnaise. The key ingredients include diced potatoes, vegetables, eggs, chicken, or ham. This salad is one of the most important appetizers at the New Year's salad buffets in Russia, as well as in some other countries of the former USSR.

The original was invented in the 1860s by Lucien Olivier, a chef in the popular Moscow restaurant called L'Hermitage. Olivier guarded the recipe until he died, but it is believed that the recipe was stolen by an employee who watched the chef at work, so the salad is still made today.

Another theory says that the recipe for the new Olivier salad was developed by one of the restaurant's customers who wanted to keep the salad alive after the chef passed away. Olivier salad as we know it today is nothing like the original version, because it was called game bird mayonnaise, made with gourmet ingredients such as black caviar, capers, hen, and crayfish tails.

Over time, the salad evolved and most of the gourmet ingredients have been replaced with more common ones such as peas, chicken, ham, and pickles. Today, the variations are endless, but most Russian chefs agree on one thing: adding carrots to the Olivier is a heresy.

Interestingly, Olivier salad is also sometimes called Russian salad, while the meatless version is called French salad or francuska salata, probably due to the French name of its creator. The Spanish version is known as ensaladilla rusa.

It is so popular in Spain that it's an important part of the Spanish gastronomy as well as being a staple in schools and summer camps all over the country. Ensaladilla rusa is also one of Spain's most popular tapas – in some cases, it's even served free of charge if you order a beer.

There's also the Piedmontese insalata russa, typically consumed as an appetizer, and with many variations, so the salad might also include ingredients such as pickled cauliflower, anchovies, and tuna. Interestingly, in the Italian municipality of Carrù, tuna is an obligatory element of the salad.

Fattoush is a simple salad made with traditional pita bread as a base on which the rest of the ingredients are built on. Pita bread is torn or cut into small bite-sized pieces, then toasted, grilled, or fried. It is then mixed with a variety of vegetables such as lettuce, radish, crunchy cucumbers, cherry tomatoes or regular tomatoes, peppers, onions, and (occasionally) garlic.

All ingredients are chopped and cut into pieces and mixed with a generous amount of herbs, most commonly mint and parsley. The final touch to this authentic salad is the dressing, usually made with olive oil, lemon juice, and pomegranate syrup. The key ingredient, next to the crunchy pita bread, is sumac - a spice commonly used in the Levantine area.

Despite its name, Chinese chicken salad is an American dish, believed to be invented by an Austrian chef named Wolfgang Puck who is doing Asian fusion cuisine in America. Others claim that the dish was invented during the 1930s, somewhere in the United States.

Regardless of the origins, the salad, consisting of romaine lettuce, shredded chicken, vegetables, fried noodles, and almonds is popular throughout the States. The Chinese part in its name refers to the numerous Chinese-style seasonings such as soy, sesame, and ginger.

Today, there are many versions of the salad, with added Mandarin orange slices, peanut sauce, or bean sprouts. 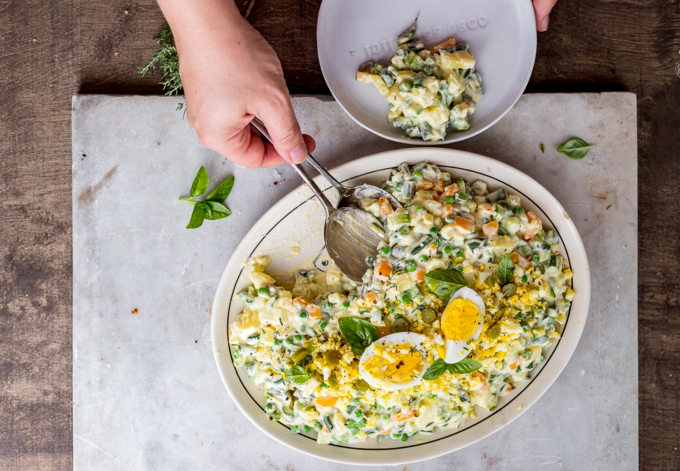 Russians impressed with “Russian salad” made by Vietnam

“Russian salad” dish which has been familiar with Vietnamese familes, was called “Olivier” – a traditional cuisine of Russia from the past to present.
April 21, 2021 | 15:28