The 73-year-old coronavirus patient of the US nationality was discharged from hospital in Ho Chi Minh City on February 21 afternoon, becoming the 15th case of COVID-19 successfully cured in Vietnam. 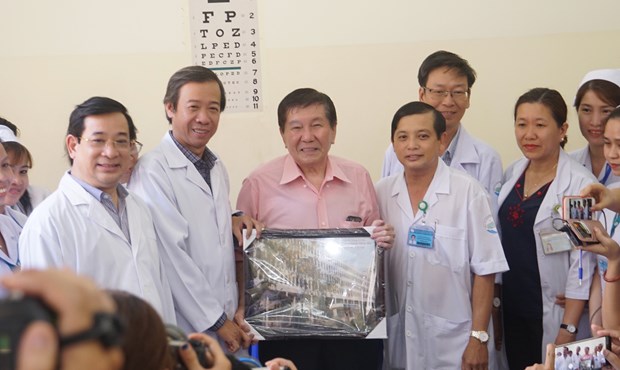 The 73-year-old patient (pink shirt) and medical workers pose for a photo when he is discharged from hospital on February 21 afternoon (Photo: VNA)

The man was treated at the Hospital for Tropical Diseases of HCM City in 21 days, and he is also the last COVID-19 case in the city.

Director of the hospital Nguyen Van Vinh Chau said the patient was hospitalised in a relatively serious condition on January 31. There were many difficulties during treatment since he is old and his heart, lung and kidney functions are weak.

Aside from giving treatment, medical workers paid attention to spiritual care for him, he added.

Luong Ngoc Khue, Director of the Health Ministry’s Department for Management of Medical Examination and Treatment, highly valued efforts by the HCM City Hospital for Tropical Diseases because this is the oldest patient among the 16 confirmed COVID-19 cases in Vietnam. Additionally, no health workers contracted the disease as cross infection was prevented.

On January 14, the man boarded a flight of China Southern Airlines from the US to Vietnam. He transited the airport of China’s Wuhan city, the epicentre of the COVID-19 epidemic, in two hours the next day. On January 16, he arrived at Tan Son Nhat International Airport of HCM City and stayed at a hotel in Ward 5 of District 3.

He showed the symptom of cough on January 26 and was admitted to the Hospital for Tropical Diseases on January 31. There, he was tested positive for the novel coronavirus.

As of February 21 afternoon, 15 of the 16 patients with COVID-19 in Vietnam had been cured and discharged from hospital./.