1.7 million Covid-19 vaccine doses to arrive in Vietnam this weekend

More AstraZeneca doses will arrive in Vietnam on May 16, the Ministry of Health announced Thursday morning
Jasmine Le
lehang1997hanu@gmail.com May 13, 2021 | 14:04

A second batch of the AstraZeneca vaccine, containing 1.682 million doses, sourced via the global COVAX program is set to be delivered to Vietnam this Sunday, the health ministry has said.

The batch, supplied by COVAX Facility via the UN Children’s Fund, will soon be allocated to all agencies and localities, Deputy Health Minister Nguyen Thanh Long said. The move will speed up vaccination programs and increase coverage nationwide.

“We are continuing to accelerate the search, access and negotiation for vaccine sources in a bid to make sure there is enough vaccine availability and safety for all residents,” the minister added.

Vietnam kicked off its national vaccination program on March 8. So far, the UK’s AstraZeneca vaccine is the only coronavirus vaccine injected in Vietnam. In late February, the health ministry purchased over 117,000 doses via Vietnam Vaccine JSC. Over 800,000 doses supplied by COVAX Facility arrived in March. All the doses have been administered to prioritized individuals in 62 provinces and cities, including frontline medical personnel, Steering Committee for Covid-19 Prevention and Control members, police and military forces.

As of May 6, more than 600,000 people have been given the vaccine. A total of 16% of the recipients experienced post-inoculation reactions, all symptoms wore off within 24 hours. The rate, according to Long, is lower than in other countries. Those having more severe side effects were given prompt treatment and are now in stable health condition. A 35-year-old female medical staff has been the only coronavirus vaccine recipient to die of post-injection shock in Vietnam so far.

In the meantime, Vietnam is working on four potential homegrown Covid-19 vaccines.

NanoCovax, developed by the Nanogen Pharmaceutical Biotechnology Company, is Vietnam’s first candidate vaccine to reach the human trial stage. It is expected to receive authorization in Q3.

Nanocovax is priced at 120,000 VND (5.17 U.S. dollars) per dose. Along with injections, the vaccine will also be developed in the form of an eye-drop and nasal spray for special subjects.

Nanogen’s current production capacity is around 10-20 million doses per year. It is planning to upgrade its factory to increase annual production to 50-70 million. The company said it would prioritize domestic distribution before exporting the vaccine.

The vaccine from the Institute of Vaccines and Medical Biologicals, known as Covivac, is on the second human trial phase. One shot of Covivac has proved effective on the British and South African variants of nCoV, which emerged several months ago and been shwon as more dangerous than the original variant.

Two other vaccinesare studied and developed by Vabiotech and Polyvac companies. 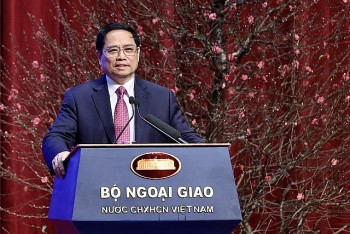