Czech Ambassador to Vietnam Viteslav Grepl expressed his gratitude to the Vietnamese Government for facilitating the organisation of the special flight on March 25 to return nearly 300 Czech and EU citizens to Prague. 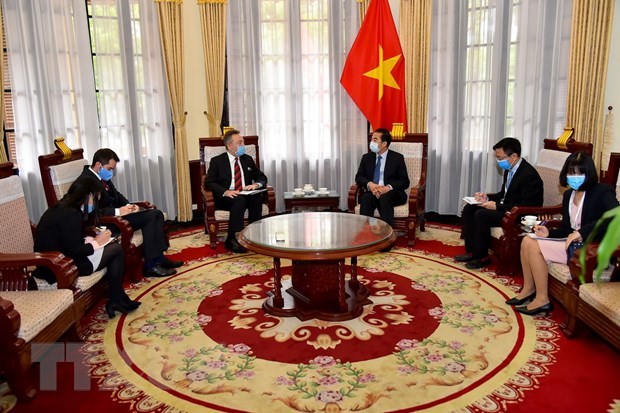 At the reception (Photo: VNA)

During a Hanoi reception for Ambassador Grepl on April 1, Deputy Foreign Minister To Anh Dung stressed that the Ministry of Foreign Affairs and authorities of Vietnam are willing to work closely with the Czech Embassy to support the country and handle issues related to its citizens who are staying in Vietnam amid the COVID-19 pandemic.

He also affirmed that Vietnam will facilitate Czech citizens’ repatriation if they need, and proposed the Czech Government continue to create favourable conditions for the Vietnamese community in the European country with health care and epidemiological hygiene.

The Vietnamese official appreciated the Chamber of Deputies (Lower House) of the Parliament of the Czech Republic for its approval of the EU-Vietnam Investment Protection Agreement (EVIPA) in late January, saying that the country was one of the first EU member nations to have ratified the agreement.

Expressing his joy at the European Council’s ratification of the EU-Vietnam Free Trade Agreement (EVFTA), Dung said this paves the way for the agreement to take effect soon after the Vietnamese National Assembly ratifies it in May.

For his part, Ambassador Grepl expressed his gratitude to the Vietnamese Government for facilitating the organisation of the special flight to return 204 Czech and 82 other EU citizens to Prague.

He praised drastic measures taken by the Vietnamese Government to contain the COVID-19 spread, and thanked local doctors for their efforts to treat the 53rd patient who is a Czech citizen.

According to VNA, the first direct flight between Vietnam and the Czech Republic, operated by Bamboo Airways on March 25, carried nearly 300 Czech and EU citizens home and tens of tonnes of medical equipment and materials to support COVID-19 prevention and control in the European country.

The flight departed from Hanoi at 8:20am and arrived in Prague at 2:30pm (local time).

The cargo included 64,200 face masks, among others, as gifts to the Czech government and people from the Vietnam – Czech Friendship Association and companies.

The same day, the Czech News Agency CTK quoted the country’s Foreign Minister Tomas Petricek as saying that it is the first repatriation flight coordinated at the European level amid the pandemic.

Also on March 25, the CTK quoted Honorary Chairman of the Czech Republic – Vietnam Friendship Association Marcel Winter as saying that the Vietnamese community is the only in the Czech Republic supporting hospitals, rescue teams and people financially in the fight against the epidemic.

He said their actions show they really consider the European nation as their second home.

A youth organisation named “Vietup” has launched a campaign to make face masks to hand over to hospitals in Prague.

According to Vietup, a number of Vietnamese convenience stores across the country with heart-shaped logos are also providing beverages and snacks for doctors, public security and firefighting forces for free.

In the northern city of Usti nad Labem, the Vietnamese community has raised funds to purchase ventilators for Masaryk hospital.

Meanwhile, the Czech newswire parliamenlisty.cz on March 24 published an article lauding the Vietnamese community for showing solidarity with their hosts during tough times.

It said Vietnamese people at the SAPA commercial centre in Prague has deployed volunteers and sewing machines to produce hundreds of face masks to present to local authorities and people each day.

The author expressed his appreciation for the Vietnamese people’s acts amid the shortage of face masks there, adding that it’s why national and local news agencies such as Mlada Fronta Dnes and Lidove Noviny are running stories highlighting their solidarity with their hosts.

Many overseas Vietnamese in European countries have been vaccinated against coronavirus and can participate in social activities, with their vaccine passports.
September 19, 2021 | 23:05
Phiên bản di động