Hanukkah 2020: What do you know about its history and meaning?

The eight-day Jewish celebration known as Hanukkah or Chanukah commemorates the rededication during the second century B.C. of the Second Temple in Jerusalem, where according to legend Jews had risen up against their Greek-Syrian oppressors in the Maccabean Revolt.
Tarah Nguyen
[email protected] November 20, 2020 | 16:20

Hanukkah, which means “dedication” in Hebrew, begins on the 25th of Kislev on the Hebrew calendar and usually falls in November or December. Often called the Festival of Lights, the holiday is celebrated with the lighting of the menorah, traditional foods, games and gifts.

The events that inspired the Hanukkah holiday took place during a particularly turbulent phase of Jewish history. Around 200 B.C., Judea—also known as the Land of Israel—came under the control of Antiochus III, the Seleucid king of Syria, who allowed the Jews who lived there to continue practicing their religion. His son, Antiochus IV Epiphanes, proved less benevolent: Ancient sources recount that he outlawed the Jewish religion and ordered the Jews to worship Greek gods. In 168 B.C., his soldiers descended upon Jerusalem, massacring thousands of people and desecrating the city’s holy Second Temple by erecting an altar to Zeus and sacrificing pigs within its sacred walls.

Led by the Jewish priest Mattathias and his five sons, a large-scale rebellion broke out against Antiochus and the Seleucid monarchy. When Matthathias died in 166 B.C., his son Judah, known as Judah Maccabee (“the Hammer”), took the helm; within two years the Jews had successfully driven the Syrians out of Jerusalem, relying largely on guerilla warfare tactics. Judah called on his followers to cleanse the Second Temple, rebuild its altar and light its menorah—the gold candelabrum whose seven branches represented knowledge and creation and were meant to be kept burning every night.

According to the Talmud, one of Judaism’s most central texts, Judah Maccabee and the other Jews who took part in the rededication of the Second Temple witnessed what they believed to be a miracle. Even though there was only enough untainted olive oil to keep the menorah’s candles burning for a single day, the flames continued flickering for eight nights, leaving them time to find a fresh supply. This wondrous event inspired the Jewish sages to proclaim a yearly eight-day festival. (The first Book of the Maccabees tells another version of the story, describing an eight-day celebration that followed the rededication but making no reference to the miracle of the oil.)

Other Interpretations of the Hanukkah Story

Some modern historians offer a radically different interpretation of the Hanukkah tale. In their view, Jerusalem under Antiochus IV had erupted into civil war between two camps of Jews: those who had assimilated into the dominant culture that surrounded them, adopting Greek and Syrian customs; and those who were determined to impose Jewish laws and traditions, even if by force. The traditionalists won out in the end, with the Hasmonean dynasty—led by Judah Maccabee’s brother and his descendants—wresting control of the Land of Israel from the Seleucids and maintaining an independent Jewish kingdom for more than a century.

Jewish scholars have also suggested that the first Hanukkah may have been a belated celebration of Sukkot, which the Jews had not had the chance to observe during the Maccabean Revolt. One of the Jewish religion’s most important holidays, Sukkot consists of seven days of feasting, prayer and festivities.

The Hanukkah celebration revolves around the kindling of a nine-branched menorah, known in Hebrew as the hanukiah. On each of the holiday’s eight nights, another candle is added to the menorah after sundown; the ninth candle, called the shamash (“helper”), is used to light the others. Jews typically recite blessings during this ritual and display the menorah prominently in a window as a reminder to others of the miracle that inspired the holiday.

In another allusion to the Hanukkah miracle, traditional Hanukkah foods are fried in oil. Potato pancakes (known as latkes) and jam-filled donuts (sufganiyot) are particularly popular in many Jewish households. Other Hanukkah customs include playing with four-sided spinning tops called dreidels and exchanging gifts. In recent decades, particularly in North America, Hanukkah has exploded into a major commercial phenomenon, largely because it falls near or overlaps with Christmas. From a religious perspective, however, it remains a relatively minor holiday that places no restrictions on working, attending school or other activities.

1. What does Hanukkah celebrate?

Hanukkah celebrates the rededication of the Second Temple of Jerusalem during the second century B.C., following the triumph of a small group of Jewish rebels, known as the Maccabees, against their oppressors the Greek-Syrians, who had defiled the temple by erecting an altar to Zeus and sacrificing pigs within its sacred walls. In order to rededicate the temple, the Maccabees had to light a menorah that would burn within the temple at all times. However, they only had enough pure olive oil to last for one day. Miraculously, the oil burned for eight days, leaving time to find a fresh supply of oil.

A menorah, the Hebrew word for lamp, has seven branches. It was originally used in the First and Second Temples in Jerusalem. Menorahs were lit daily using olive oil of the purest quality. A hanukkiyah is a Hanukkah menorah used specifically to light the candles (often used today instead of oil) on Hanukkah. With nine branches, it is lit each night to celebrate the miracle of oil lasting eight days. Despite these differences, today hanukkiyahs are commonly referred to as menorahs.

3. How to light the Menorah

There are very specific rules about lighting a menorah; luckily most of them rely on simply knowing your left from your right. The menorah has nine branches, one for each night of the Festival of Lights, plus a shamash, meaning helper or attendant, which is lit first and then used to light the other candles. The shamash always sits a bit higher or lower than the rest of the candles so as to not get confused with the others. The candles are placed on the menorah from right to left, the same direction in which one reads Hebrew. However, when lighting the menorah you move in the opposite direction, using the shamash to the light the candles from left to right. Confusing? Eh, do your best.

How many candles will you need? 44. Each night a new candle is added to the menorah, plus a shamash, and burned all the way through. But don’t worry, there is no need to count; if you buy a box it will come with 44.

4. There is a height limit for menorahs.

There is a clearly defined height limit for menorahs of 32-feet-tall. In New York City, two menorahs rival each other for height. One is in Grand Army Plaza, Brooklyn and is claimed to have a shamash that is six inches higher than its Manhattan competitor located on the corner of Fifth Ave. and 59th St.

5. The traditional use of oil even applies to the holiday’s foods.

6. Dreidel, dreidel, what?The miracle of the oil lasting eight days is not only celebrated through the lighting of the menorah, but also in the traditional foods that are eaten. Two of the most popular dishes, latkes (potato pancakes) and sufganiyot (jelly donuts), are both deep-fried in oil. While the tastiness of these foods are reason enough to eat them, it’s the oil used to cook them that make them a staple for most Hanukkah celebrations.

Dating back to before the Maccabee revolt, dreidels (four-sided spinning tops used to play a gambling game) were originally used as a type of decoy after the Greek-Syrian armies of King Antiochus IV Epiphanes enacted a series of laws outlawing many Jewish religious practices. The Jewish people simply moved their studies of the Torah underground, pulling out their dreidels and pretending to play games to confuse soldiers. Since then, dreidel has been resurrected as a fun game played during Hanukkah for chocolate coins called gelt, to commemorate this time. Each side of the dreidel has a different Hebrew letter, which tells the player how much to put in, or take out, of the pot. Together, these four letters form the acronym for “Nes Gadol Hayah Sham,” which means “a great miracle happened there,” referring to the miracle of the oil lasting eight days in Israel.

7. Why is Hanukkah celebrated on different dates?

While it rarely seems to be celebrated on the same day, on the Hebrew calendar, Hanukkah always falls on the 25th day of the month of Kislev. The first day of Hanukkah can come as early as November or as late as the end of December, which means occasionally Hanukkah overlaps with Thanksgiving or Christmas. The last time we celebrated Thanksgivukkah was in 2013. Hanukkah and Christmas saw duel celebrations in 2005 and will converge again in 2024. Due to the difference in calendars, every year Jewish people around the world—and their gentile friends— are left Googling the start date for Hanukkah.

8. How do you spell Hanukkah anyway?

There isn’t one right way to spell Hanukkah. If you are confused, you can blame transliteration. Originally written in Hebrew, a character-based language, the variations arose when the word had to be written in English, an alphabet-based language. Lacking exact English equivalents to the Hebrew sounds led to the many spelling variations we see today: Hanukkah, Chanukah, Hanukah, Hannukah, Chanukkah. In English, the different spellings don’t affect the pronunciation. So when writing Happy Hanukkah, have no fear, pick your favorite. 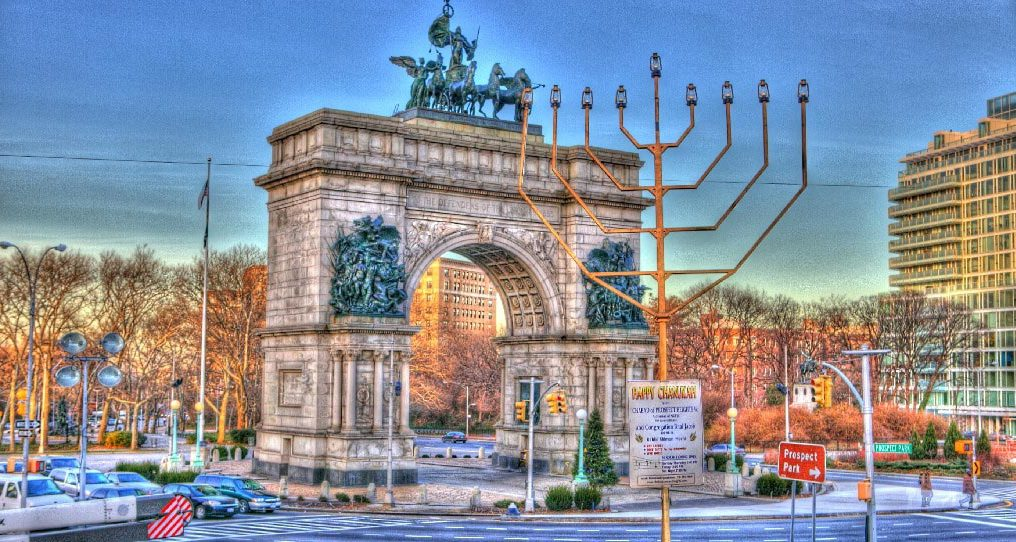 Hanukkah 2020 to enjoy celebrations around the world

We all know that the best thing to do during Hanukkah is to celebrate with family and friends. It’s a time to appreciate your loved ones and honor an amazing, deep-seated tradition.
November 18, 2020 | 16:15