Hoang Thuy listed among top 100 beauties in the world

Whilst Hoang Thuy was the only Vietnamese representative to make the cut, approximately 14 million people contributed to the poll by voting.

In line with the voting, the Vietnamese beauty has been placed just behind Cuban actress Ana De Armas and is followed by Alisa Manyonok, Miss Earth Belarus 2019.

28-year-old Hoang Thuy is from the central province of Thanh Hoa and stands at 1.77 metres tall with measurements of 82-60-94. She first rose to prominence when she became the winner of Vietnam’s Next Top Model 2011.

In 2017 she achieved the feat of becoming the first runner-up at the annual Miss Universe Vietnam pageant.

Last year she went on to represent the country at Miss Universe, going on to clinch a Top 20 finish.

Son Ye Jin, an actress from the Republic of Korea who is most famous for being in the movie “Crash landing on you”, tops the list, closely followed by Lalisa Manoban of Thailand, Tzuyu of Taiwan (China), and Urassaya Sperbund of Thailand.

A number of other well-known figures are also featured throughout the rankings, including Kylie Jenner, Selena Gomez, and Song Hye Kyo.

Voting first began from April with the range of criteria including facial beauty, charm, and popularity index. 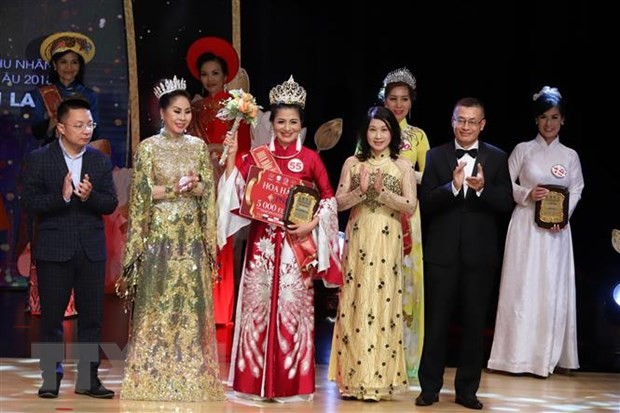 On the night of July 16, the Mrs. Ao Dai Europe contest took place with the participation of many contestants, Vietnamese people in Europe, and European friends. The contest left a great impression on the beauty of Ao Dai as well as of Vietnamese women.
July 18, 2022 | 06:35