A family with patriotic traditions

Cao resides in Tho Duong village, Dai Yen commune, Chuong My district, Hanoi. He used to work at the Ministry of Irrigation during the Vietnam war and all of his 5 siblings were all played active parts during the period.

When southern Vietnam entered the resistance war against America, he and all of his 5 siblings went to the frontline of the battle. Only his parents stayed and lived in the 4-room cottage, which was then divided into two parts, one for the family to live, one for the government to use as evacuation and working site.

“Until now, I still can not forget that day when Uncle Ho told stories about the cooperative model, farmers and the heroic Thai Nguyen homeland. He even guided his hands to signal us singing the song “Ket Doan”. He was wearing an ivory white khaki shirt, rubber sandals back then”, Cao recalled.

“Given how simple and respectable Uncle Ho was, I thought I’d got to do something to show the fellow generations how great he was”, the 84-year-old added.

In 1987, with pension on hands, Cao started to collect images, drawings and documents related to everything about President Ho Chi Minh.

After more than three decades of relentless searching and collecting, The memorial room, which is on the 3rd floor of his home, until now, has been housing over 370 valuable documentary photos and drawings picturing the president’s life and journey for national salvation. Photos are systematically categorized according to logical timeline, enabling viewers to have a better overview of his life, from childhood to the day he left Nha Rong harbor to find a way to liberate Vietnam, his years spent overseas, to his presidency in Vietnam.

A large photo of President Ho Chi Minh and incense bowls are solemnly placed in the room. Visitors who want to pay respect the late president can offer incenses.

Besides the memorial room, Cao also hangs many photos of President Ho Chi Minh, Karl Marx mountain, Lenin stream, and Pac Po Cave on the two sides of a big mirror in the living room.

“I want to remind my offsprings to think of what the President had contributed to the country every time they look at themselves in the mirror”, Cao said. 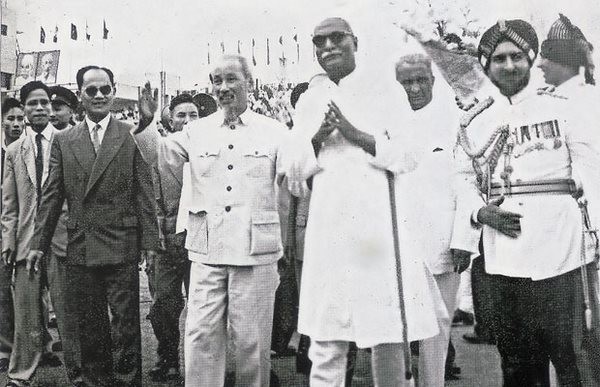