Vietnamese team has had a thorough preparation for the International Army Games 2021 which is slated to take place from August 22 to September 4.
Malie Nguyen
Dieuhuong270198@gmail.com June 24, 2021 | 10:08

A delegation of the Department of Military Training under the General Staff and the Artillery Arms of the Vietnam People's Army (VPA) on June 21 visited the artillery team, which is under training in Vinh Phuc northern province for the 2021 International Army Games.

The team will compete at the Masters of Artillery Fire category at the event.

Maj. Gen. Thai Van Minh, Director General of the Department of Military Training, spoke highly of the team members’ sense of responsibility, determination and endeavors to surmount difficulties during training.

Commander of the Artillery Arms Maj. Gen. Nguyen Hong Phong said that team members need to be aware that participating in the Army Games is not only an honor and pride but also a heavy responsibility. Therefore, each team member needs to focus on training their health and hone their skills further to achieve the best results in the upcoming Games.

Vietnam’s participation in and preparations to host the Games further affirm the determination and success of Vietnam in general and the People’s Army in particular in realizing the “dual targets” in the face of the Covid-19 pandemic.

The Vietnam People's Army is sending troops to the Army Games 2021 to compete in the Meridian competition for the first time.

After three months of training, the Vietnamese topographer team is ready for the event.

The Meridian competition has three categories, including shooting, azimuth measuring, and relay.

Here are photos of the topographer team during training for the “relay” category:

According to the Director of the school Senior Colonel Tran Quang Phe, over the past two and a half months, the team has been actively conducting training plans as scheduled.

During the training, the team has overcome physical health challenges for both handlers and service dogs, mastered grenade throwing and shooting techniques, as well as trained service dogs, among others.

Five pairs of service dogs and handlers will be selected to take part in the competition.

Reportedly, the team's training results at present have been improved in comparison to the same period last year, equivalent to about 70% of the results of the winner at Army Games 2020.

In the coming time, the team is determined to train hard in order to keep fit and raise competence so as to meet all requirements of this year’s competition.

In addition, Border Guard School 24 also prepared other procedures for the team to join the 2021 Army Games in accordance with the regulations of the organizing panel.

Having inspected the team’s training, General Thai acknowledged and hailed their great efforts, responsibility and a high determination in fulfilling all assigned missions. General Thai also requested the team to increase training so as to gain the best results in the upcoming event.

Meanwhile, General Thai asked the Vietnam Border Guard Command’s Department of Politics to carry out Party and political work during training while strictly maintaining Covid-19 prevention and control for the team.

A training ground is being created in central Vietnam for tank crews to practice for the upcoming 2021 International Army Games.

It is coming up on a shooting range belonging to the National Military Training Center No.2 in Tay Son District, Binh Dinh Province, and, once completed, will have a scale and equipment similar to that of the Alabino Military Training Ground in Moscow, Russia, where the games' Tank Biathlon competition will take place.

During the 2020 International Army Games, Vietnam’s tank team triumphed at the final race of tank crews of the second division in the Tank Biathlon event. The Vietnamese team completed three rounds of competition in 2 hours, 12 minutes and 42 seconds, bringing down 13 out of the total 24 targets.

Vietnam will send two warships 015-Tran Hung Dao and 016-Quang Trung to compete at the 2021 International Army Games held by Russia this August, according to the Vietnam Navy newspaper.

The two missile defense vessels of Vietnam will compete in the "Sea Cup" with four categories, including Marine skills, fighting against sinking at the onshore training facility, usage of salvage vehicles, and artillery fire tests.

015 Tran Hung Dao and 016 Quang Trung are two missile defense vessels built by Russia under Project 11661E "Gepard". They have been employed by Brigade 162 of the Vietnam People's Navy since February 2018.

The ship is equipped with many modern weapons manufactured by Russia under a contract signed with the Vietnam Navy, in order to build up a regular naval force and improve the capacity to protect the sea and islands of the country.

The Vietnamese Gepard-class defense vessels are stealthy, able to track, search and destroy surface ships and submarines. At the same time, they can perform missions of air defense, escorts, and patrol to protect the territorial sea and exclusive economic zone independently or operate in teams. 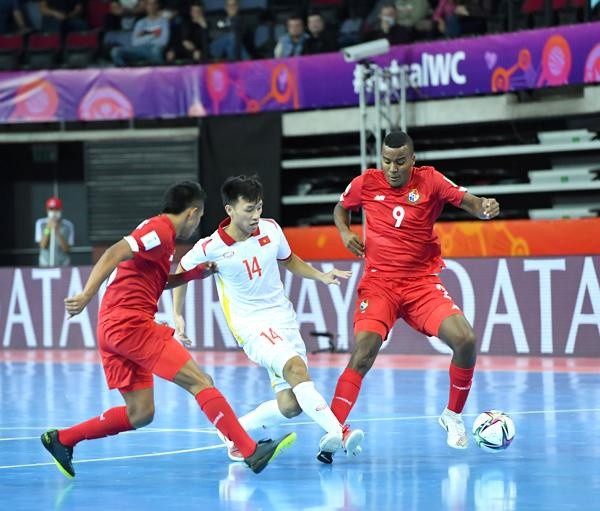